Please leave a comment saying where you know me from.
And make sure to check my profile for infos on my posts, fandoms, downloading etc.
Commenting here is compulsory, if you don't I won't add you back.
( Collapse )

I read 24 books... out of which most were comics and mangas -_-" Not that I'm considering them lesser books, but I wanted to read 25 books, as I already read so many mangas that I don't count them.

To give you an idea, based on how many mangas I bought this year, removing those on my "to read" pile, I must have read over 200 mangas. Which is a good average for me. I've read more in my late teens, but less mid-twenties, now I'm slowly getting back into it.

But since I started reading comics more regularly, I like to keep track of those on goodreads (since I don't own them all, I borrow a lot from my BF) as well as getting recommendations from goodreads.

Book-wise, 2015 was a meagre year. I have considerably less time than in 2014, so I had to be more selective. I'm gald I discovered the "Lunar Chronicles" series, as well as more Rainbow Rowell. Jenny Han doesn't really do it for me anymore, and the Shadowhunter books are getting too lengthy for my liking (let's see if the TV series gets me in the mood again).

Apropos TV series, those distracted me from reading a lot, even though I consume them less than when I downloaded during my uni years (aka bored out of my skull and without TV/Netflix).

For 2016 I'm setting a new goal of 25 books, as well as completing my on-going shows (or at least all the Netflix available episodes). My to-read list is long enough (and incomplete) to keep me going for the next year.

What did you read this year that you feel was noteworthy? What are you expecting in 2016?

The reason I stopped writing personal entries is because now I save them as drafts instead of posting them immediately, and when I read them after a couple of days I tell myself to stop being such a whiny little bitch and to move on, so I deleted the entry and never post it.

So far this is better than therapy. And a lot less embarrassing then venting on tumblr for anyone to see.

Ahem. I'm not dead. Sorry to everyone who doesn't follow me back on tumblr, if you thought I'd disappeared off the face of the earth. I haven't.

Long story short, I lost interest in LJ. With its constant changes, the general exodus to tumblr, I felt this journal had grown obsolete. The things that mattered to me most were my Japan posts but the response to them was so small that I wasn't motivated at all to continue posting. I have never been looking for online fame, but if I can reach more people via tumblr, then so be it.

What future for this account?
RIght now, I don't know for sure. There are some personal things I want to write down, but tumblr is TOO public, and therefore I might go back to the original/intended use of LJ, its journal function. Expect more locked posts.

Secondly, I'd like to resume Japan-blogging, crossposted with tumblr. It'll be a little more time consuming, but I'll try it out. Especially since:

New Year was such a terrific experience that I had to renew it.

lucy_hp will be joining me again. More on the upcoming trip soon(ish).

So, how's everyone been?

In my previous post I wrote "near future", but Japan Expo is immediate future! I prepared even less than for last year's edition. I had a brief look at the program & goods and only bought my ticks last weekend.

I also recycled my cosplays from Japan. I was hoping to finish at least one more, but since I'm only going 2 days, I don't really need more than 2 cosplays. These are my cosplay plans: 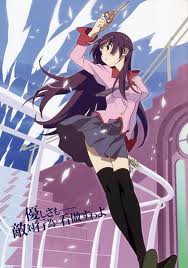 Yes I'm well aware that there is a summer version which would have been better suited for a summer con, but this cosplay was originally planned for a winter con. The other costume (Ririchiyo from InuXBoku) I planned for Friday is not finished. 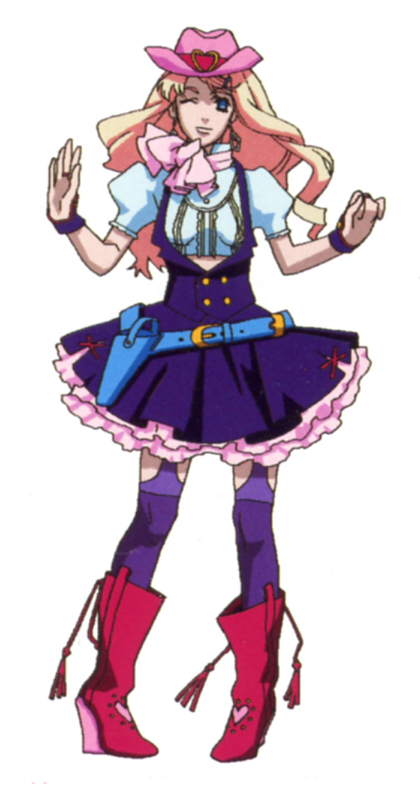 Not doing the pink boots tho, I think they look dumb IRL. I did a pink&hearts mani to compensate.

I'll be leaving for Paris tomorrow, I hope the Hotel wifi doesn't give me a headache like last year and I can keep in touch with everyone! See you soon~

I'm sorry I neglected my journal, but I was intensely writing my master thess (the last 3 weeks before deadline were especially intense).
Long story short, I now have a master's degree which means I can embrace Jenna Marbles' way of life and  I can hug my diploma before leaving for work as a stripper.
j/k. At least half-joking. From the frying pan into the fire as they say, I now need to find work that will somehow lead me back to Japan. Somehow.

Near future plans are: going to Japan expo, renew my paid account and start blogging about Japan again. It'll probably be text-posts like the fukubukuro one (sorry you picture lovers, there are many blogs dedicated to Japan pictures already).

I can't believe time went by so fast. Two years ago I was glad to be done with my studies in Belgium and planned moving back to Luxemburg. One year ago I received my acceptance letter from Sophia and worked all summer and prepared my Japan adventure and also hopelessly and obsessively fell in love with a man named Tom Hiddleston.
All my efforts in those past 2 years were devoted to going on that exchange semester in Japan, ngl I feel a little "empty" now that I've achieved it and need a new goal to work towards. It's probably going to include Japan again. Fingers crossed!

I hope you've all been well, I've been keeping up with the tumblerians amongst you (at least until beginning of May-ish, when I completely disappeared from the blogging world) so don't hesitate to update me on things you want to share =)

Look a this and tell me you're not super-duper hyped for it?

I know my words for MadHouse's anime adaptations of US shows/comics have not always been the kindest and to be perfectly honest I never finished the Iron Man and Wolverine animes, but this time it's a movie, with the budget that goes with it and making it less likely that the plot will be dragged on.

This will go on sale on April 16th, aka shortly before the theatrical release of Iron Man 3. I'm glad this time Marvel didn't miss their window. I hope I can get my hands on it before I see the movie (although those are different story/time lines/universes right? Because unlike movie-verse, in comic-verse Black Widow is sent to kill Tony Stark, and this looks more like it?). If I were still in Japan, I'd be at Tsutaya first thing in the morning -_-

Since there will be many Shield agents (I spotted Maria Hill I think?), could there be some Coulson too? I mean if you must add the Punisher, isn't that a little random?

Just give me an Avengers/Thor anime already Madhouse (preferably with all the crazy stuff that you can't put in movie-verse, like genderbent Thor and Loki. Those ladies would look slammin' in anime design). I'd even buy a BR player for that...

My Tokyo dream is over -for now- and I'm back to my regular, busy life. I don't have so much "post-Japan-blues" this time, because it was simply such a great and perfect time that I want to cherish these memories and not tarnish them with depressive feelings. Gotta keep looking up etc etc geez I'm so positive these days you wouldn't believe it.

Anywhoo, that doesn't mean I don't have a hard time readjusting to my old life style. Occasional Japanese slips when I'm not really paying attention to what I'm saying, I caught myself removing the labels of the bottles before throwing them away, "I've forgotten how cheap/expensive this was", I'm confused that Japan has now become "over there" and is not "here" anymore etc.

reimaru last week, which reminded me that I still haven't posted the full pics of my fukubukuro loot! Well then, on to the pics & explanations:

Fukubukuro 2013 (Tokyo):
I woke up extra early on January 1st, first at 5:30am to see the first sunrise of the year, then again at 6:30 to get ready and be in Harajuku at 8am, in time to pick up some cash and start looking around. LaForêt said they opened at 9am, but most people were already inside and buying at 8:30 when I got there. The stores in Takeshita doori only open at 10am, but some like Matsumoto Kiyoshi were already open and selling. Their makeup fukubukuros sold out real quickly, I managed to get these 2: 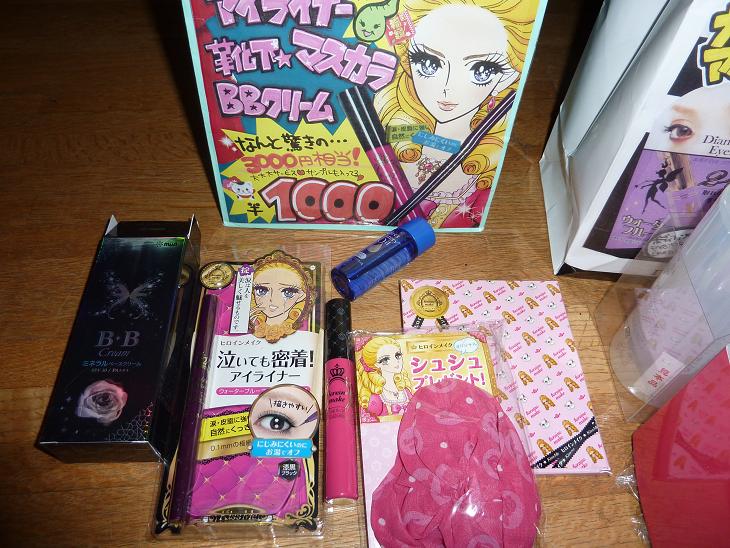 As you can see, none of these bags were much of a surprise, since the contents were displayed on the bag so you could guess what would be inside. 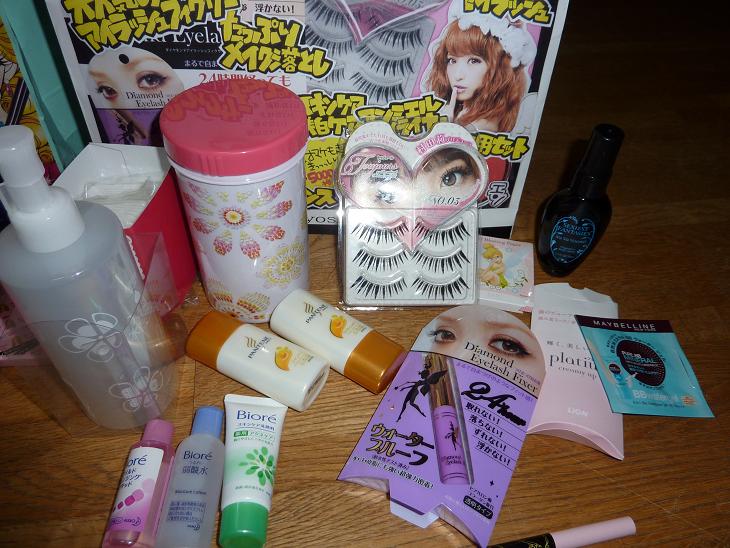 These are also pretty good deals, considering the first one for 1000Y has a mascara worth 700Yen and the bigger one contains eyelash glue worth approx. 1000Y already.

My favorite is the first one, because BB cream as well as mascara and eyeliner from Heroine Make for only 1000Yen is a pretty nifty deal. Sadly they were sold out in the morning, or I would have gotten another variation of the 1000Yen ones. 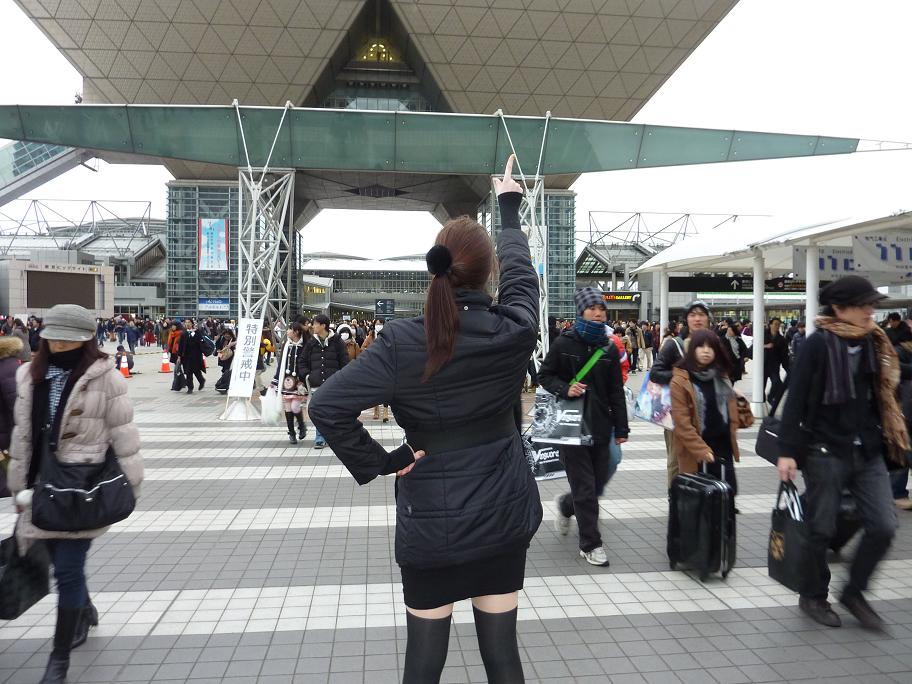 A 3-days' quest that challenged my patience, endurance, feet and demanded a strong will (i.e. to resist and not buy every single things because OMG SO SHINY COME TO MEE!!)

I'm proud to say that I've completed my first pilgrimage to teh Comiket Market aka Otaku mecca. Now I can die in peace*

*lies. Obviously no one's dying before seeing the end of Phase 2 (and possibly Phase 3), silly.
Collapse